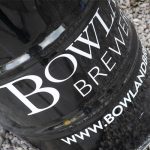 The brewery started life in 2003 when the founder decided to follow his dream to establish a viable micro-brewery. Over the next ten or so years the Bowland Brewery went from strength to strength picking up lots of awards and commendations along the way. The core range of cask beers has continued to expand, as has the number of pubs, bars and restaurants supplied. To keep up with demand the brewery itself has also had a little growth spurt. The founding principles of using only the finest ingredients in the perfect proportion with an obsessive attention to detail remain the guiding principles of today. The process has simply been scaled up a bit.

The brewery, based at Holmes Mill in Clitheroe and owned by James’ Places, offers visitors a chance to see a fully operational brewery as well as an opportunity to share enthusiasm for beer.