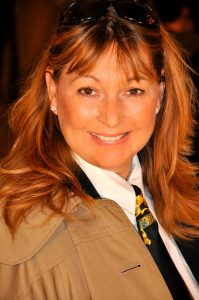 Amanda Thompson OBE, Managing Director of Blackpool Pleasure Beach in the United Kingdom, became IAAPA’s 2020 Chairman of the Board of Directors. In addition, IAAPA introduced the 2020 officers during the Kickoff Event at IAAPA Expo 2019, the association’s annual global conference and trade show in Orlando, Florida.Thompson brings lifelong industry experience and knowledge to the IAAPA role that is as much generational as it is personal. Amanda’s great-grandfather, William G Bean, established Blackpool Pleasure Beach in 1896.  Her grandfather, Leonard Thompson, assumed leadership of the amusement park in 1931, and her father Geoffrey oversaw the business from 1976 until 2004. Since that time, Amanda has the led the park as Managing Director (CEO). Her election as IAAPA Chairman of the Board marks the first time a second member of the same family has chaired the global trade association. She is also the first female Chair from Europe and the third woman in its history.

Thompson has been part of the amusement park industry throughout her life. In 1982, she founded Stageworks Worldwide Productions, an entertainment company that produces shows around the world. Today, she remains president of Stageworks, a subsidiary of Blackpool Pleasure Beach Limited (BLAC). Thompson played a key role in the creation and styling of Blackpool Pleasure Beach’s Big Blue and Boulevard Hotels.  She is producer/director of the Hot Ice Show in Blackpool.  Amanda’s previous productions include “Eclipse,” “Mystique,” and “Forbidden”.  She was also the winner of the Michael Elliott Award for Director of the Year.

Thompson has been a dedicated and involved IAAPA member for decades. She has served two terms on the IAAPA Board of Directors and has chaired the IAAPA Europe, Middle East, and Africa (EMEA) Regional Advisory Committee. She has also served as a member of IAAPA’s Executive finance, Membership, and Entertainment Committees.

Thompson received the coveted Order of the British Empire (OBE) honor for her services to tourism in 2012. She has worked on 15 variety shows for Her Majesty the Queen of England and is a Patron of Blackpool’s world-famous Grand Theatre and the Blackpool Civic Trust.

In addition to Thompson, the IAAPA officers for 2020 include:

For a full list of 2020 IAAPA Board of Directors, please visit www.IAAPA.org/Board.

Blackpool ‘We’re good to go’- even the donkeys

Blackpool: on the crest of a wave