New £100,000 ‘Four Corners of the World’ Feature to be unveiled at SEA LIFE Blackpool 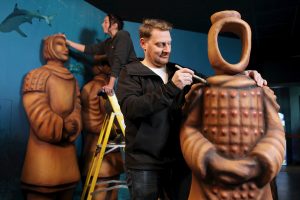 A £100,000 investment is being unveiled for a brand new area at SEA LIFE Blackpool, featuring rare and unusual sea creatures from all over the world, as part of its ocean conservation campaign.

Although full details have yet to be revealed, it is believed the new showcase feature will be called ‘Four Corners Of The World’ and highlight the importance of reefs and wrecks in creating and sustaining rich marine eco-systems.

It is part of the popular seafront aquarium’s ‘breed, rescue, protect’ campaign to spotlight the threats to our oceans, recently championed by legendary TV environmentalist Sir David Attenborough on his landmark Blue Planet II series.  These include plastic pollution, overfishing and habitat destruction, which are leaving many species endangered or even close to extinction.

Behind-the-scenes images show the new feature, which is currently being finalised and will include recreated partial shipwrecks and man-made marine eco-systems from across the world. Asia, Africa, Europe and America will be represented with famous landmarks, such as the Terracotta Warriors, being recreated.

Visitors will also find information on the many local wrecks off the Fylde Coast, including Nelson’s then flagship HMS Foudroyant, which famously ran aground and was wrecked in a hurricane-force storm in 1897.

It will also feature replica reefs to explain their importance to the ocean’s fragile eco-systems and the many marine species, which call reefs and wrecks their home, as they provide shelter and a variety of life, helping to feed and sustain the various creatures.

Matthew Titherington, general manager at SEA LIFE Blackpool, said: “We’re really looking forward to opening our new Four Corners attraction and welcoming our first guests there.  It will be interactive and educational, helping people to understand more about these important aspects of marine life and the massive bio-diversity they support.

“It’s a completely new feature and represents a major investment.  Blackpool will be the first SEA LIFE anywhere in the world to host this remarkable attraction.”

SEA LIFE Blackpool works closely with its charity partner, the Sea Life Trust, as part of its popular ‘breed, rescue, protect’ campaign, to develop and support ocean conservation projects worldwide, including threatened species, such as sharks, turtles and sea horses.

‘Bring him home’ Lancashire’s Alfie Boe to light up Blackpool