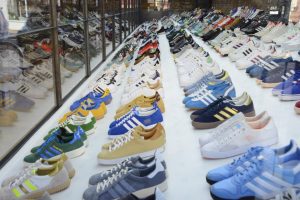 Darwen’s adidas brand consultant and adidas SPEZIAL designer, Gary Aspden is set to present an exhibition of 1000 shoes from his own archive as well as those from fellow adidas collectors at the upcoming British Textile Biennial.

Throughout October 2019, the British Textile Biennial will look at fabric as a means of expression; exploring textiles as a vehicle for protest and cultural identity in installations, performances and art works that take a dynamic look at our relationship with that most basic and ancient of human creations, cloth.

Commissioned by Super Slow Way, the inaugural Biennial programme highlights the nation’s creation, innovation and expression in textiles against the backdrop of the impressive infrastructure of the cotton industry in Pennine Lancashire.

With its epic mills, and grandiose civic architecture along the country’s longest waterway, the Leeds & Liverpool canal, this landscape tells the story of textiles.

In Blackburn’s magnificent Cotton Exchange, the adidas Spezial exhibition celebrates the training shoe and its legacy as an important marker of when the young working classes found cultural expression in an item of clothing.

The 80s in Blackburn saw the emergence of the cult of the adidas trainer on the football terraces, the dancefloors and abandoned mills and warehouses of the town.

Laurie Peake, Director of Super Slow Way, which is organising British Textile Biennial said: We are thrilled to be showing the adidas Spezial trainer exhibition within the first British Textile Biennial.  Designer Gary Aspden is a great example of a product of Pennine Lancashire with textiles and fashion in his DNA; the son of a mill worker and one of a generation of passionate Blackburn Rovers fans whose wardrobes are a vital vehicle of self-expression and group identity.  The adidas trainer is a key element of that wardrobe and this exhibition is one of the biggest collections ever shown. We are showing it in the magnificent space of Blackburn Cotton Exchange which links our historic textile roots to this vibrant contemporary creation.

Gary Aspden, Designer/Curator of the adidas Spezial range said: I grew up in Darwen and spent most of my formative years in Blackburn. The experiences of my upbringing and youth have always been a source of inspiration for the adidas Spezial range that I design and curate.  The creative team who work on Spezial are all from the area so getting involved with the British Textile Biennal whilst supporting Nightsafe seemed a perfect fit.  The exhibition will be accompanied by an interactive engagement programme funded by the National Lottery Heritage Fund where people will be able to share stories of how their own trainers and wardrobe choices expressed their identity and passions.

Councillor Phil Riley, Blackburn with Darwen Borough Council’s Executive Member for Growth and Development, said: What a massive coup it is for Blackburn to be hosting the adidas Spezial exhibition as part of the British Textile Biennial.  As a designer, Gary optimises everything that the biennial celebrates and I would like to personally thank him for working so hard to bring this event to our borough – the place he’s proud to call home.  His work is internationally renowned and there’s a huge movement connected to the adidas Spezial collection – which reaches across a wide and diverse audience. It’ll be fantastic to celebrate that at this event right here on our very own doorstep.A similar exhibition was held in Manchester in 2016 and it proved hugely successful with people travelling from all over the world to see it – how incredible to host something similar here.