What takes a 10 hour day of filming, a 3m x 6m canvas, 200 paint filled balloons and 70 litres of watered down paint?

Blackpool based arts organisation LeftCoast have created a new ident for ITV due to air on Monday 18 May to Saturday 23 May. The colourful ident, part of the ITV Creates project (www.itv.com/itvcreates), showcases a crew of local volunteers, known as the LeftCoast Makers, taking part in a joyous paint-fueled release of energy.

Tina Redford, LeftCoast’s Artistic Director said, “We were approached by ITV to develop a concept for the ident way back in November. The Researchers found our website and really liked the playfulness in the work that we do. Sarah Harris from the LeftCoast team developed the artistic idea taking her inspiration from working with our volunteers …and what better way to celebrate their loyalty than in a piece of art on prime-time TV!

“It has been difficult keeping this secret project under wraps since we filmed the ident at the ITV studios in February. The shoot itself was super messy and fantastic fun so it’s been hard not to share such a great experience with our friends and family. We have had to wait until the broadcast date to talk about it and now it’s here.”

Inspired by over 100 volunteer dancers that performed in RUSH in 2018, (a large scale performance commissioned by LeftCoast and performed in front of the former police building in Bonny Street, Blackpool – www.leftcoast.org.uk/rush), the ident features paint filled balloons with positive affirmations written on them thrown against a white wall, with the big reveal of a paint-bombed ITV logo.

The ident Makers were chosen at random from RUSH18 participants who have continued to engage with LeftCoast on subsequent volunteer projects. Positive affirmations were written on paint balloons to describe the feelings and benefits from taking part in volunteering on LeftCoast projects. These affirmations then became part of the image which makes up the ITV logo. 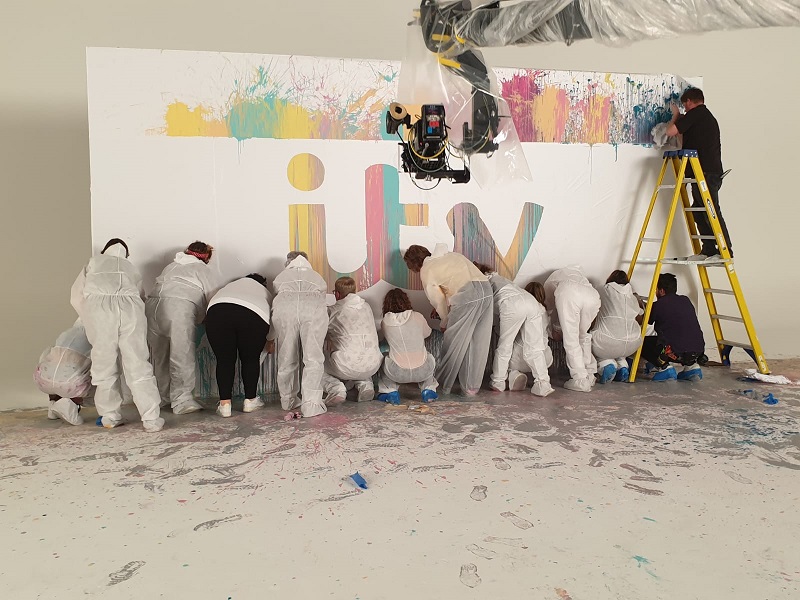 Sarah Harris, Artist and LeftCoast’s Creative Community Activist said, “This project is a celebration of people coming together and expressing their positive experiences. So, I chose colours that have a luminous quality, which for me expresses joy. I developed the colour palette over a few months, blending existing colours and experimenting with various schemes to find the right mix and ensure we’d get the right ‘pop’ on screen.

“In the lead up to filming, the Makers were asked what they got from engaging with LeftCoast projects, phrases included ‘working together’ ‘swapping stories’ ‘buddying up’ ‘talking’ ‘joy making’. By coming together and committing their responses in ink and paint creating the ident represents a real affirmation to the power of volunteering in general.”

Sarah continued, “Everyone was really pleased with how the ident turned out. Once ITV had shot all the footage they needed, everyone in the studio had a go at throwing paint, including all the production crew. It turns out they’d been itching to have a go all day!”

Adam McClean, one of LeftCoast’s Makers, reflected on the day, “The experience for me was very exciting, heading to London and filming in a studio with a lovely bunch of people, was an experience I will cherish, it was a long and tiring day but so worth it, every time I see the ITV logo now it makes me smile. It was a blast and filming for ITV was a dream come true.

“When we are finally allowed to tell people it will be a big relief, we’ve been keeping this secret for months now and I’ve been bursting to tell people about my wonderful day filming in London. Volunteering for LeftCoast over the years has given me some of the most wonderful memories that I will remember for the rest of my life.”

For more information and behind the scenes images please visit leftcoast.org.uk/itvcreates

The Wellbeing Farm – Licence to Wed