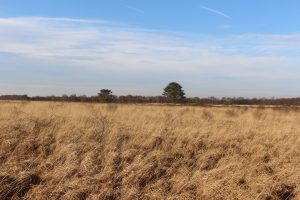 Healthy peatlands actively capture and store carbon from the atmosphere, forming an effective and vital natural resource in the fight against climate change.

Today Lancashire Wildlife Trust (LWT) starts work on the next phase of the restoration of Winmarleigh and Cockerham Mosses Site of Special Scientific Interest (SSSI), outside Garstang in Lancashire.

Since taking over the management of these two adjoining lowland raised peat bogs in 2010 and 2012, LWT has worked to restore these vital habitats. This is not only halting the loss of carbon into the atmosphere that drained or degraded bogs release, but will also help rare bog plants, such as carnivorous sundew, to thrive along with other specialised plants and animals.

With funding from the Lancashire Environmental Fund (LEF), further work will be taking place around the boundary of the area to raise water levels through a series of drain blocking works and bund building (walls of peat that hold in water).

Lancashire Peatland Initiative Manager, Sarah Johnson said, “We are really excited to be starting the next phase of works on these rare and precious peatlands. Our region has lost 98 per cent of its lowland peat bogs, making the restoration of these remaining salvageable habitats even more important.”

Winmarleigh Moss is also home to the endangered large heath butterfly, one of only three sites in our area where it can be found. Habitat destruction has caused this specialised butterfly to become locally extinct in many areas. However, a breeding programme partnering LWT and Chester Zoo has already seen the species be reintroduced to Heysham Moss and this summer should see it’s return to two other peatlands in Salford and Warrington.

This latest phase of works will also help to kick start a complimentary project, which aims to transform an agricultural field that adjoins Winmarleigh Moss into a pioneering carbon farm, and will follow straight on from the LEF works.

The carbon farm, believed to be the UK’s first, is part of the EU funded Care-Peat project which is looking at how peatlands in five countries across Europe can be restored so that they stop releasing harmful carbon into the atmosphere and can be restored as carbon sinks.

The field, on former lowland raised bog which was drained for agriculture in the 1970s, will have water levels raised to rewet the site, and then be used to grow a permanent cover of sphagnum mosses. This will aim to both protect existing carbon that is held in the soils, as well as capture further carbon from the atmosphere and lock it away for millennia, thus providing a vital natural resource in the fight against climate change.

The trial is also looking into the benefit of this alternative land use on areas surrounding peatland reserves, such as Winmarleigh Moss, both in terms of capturing carbon and improving wildlife sites as well as regulating water levels within the landscape.

Sarah continues, “Sphagnum mosses are vital in the fight against climate change. as they take in CO2 from the atmosphere via photosynthesis, and then essentially convert it into carbohydrates, which are stored in the plant itself. As they grow bigger more carbon is stored.

All plants will sequester carbon in this way, but what makes sphagnum special is that peat is only formed in very waterlogged acidic conditions, and only very specialised plants – like sphagnum – can thrive in it. Because of those acidic conditions, as the sphagnum moss grows the underlying sphagnum vegetation decomposes very slowly, creating the peat. This results in the carbon in the sphagnum being buried permanently in the peat, rather than released back into the atmosphere again.”

Peatlands are one of the most important carbon stores on the planet, with the world’s current peatlands holding twice as much carbon as all of the world’s forests.

It is hoped that the carbon farm at Winmarleigh will provide vital research data to support other peatland restoration and larger-scale carbon farming projects in the future.

Go behind the scenes at the Winter Gardens

FT Names Burnley as One of UK’s Leading Tech Towns