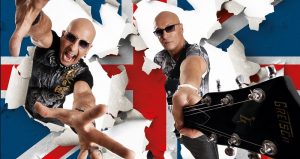 A host of internationally-acclaimed music stars are lined up for Pride Blackpool’s biggest ever weekend.

The festival will open on the night of Friday 5 June on the Tower Festival Headland with performances by two of the UK’s most enduring music acts – Right Said Fred and Marc Almond.

Then, on the Saturday night, June 6, America’s Jake Shears, lead singer of the award-winning Scissor Sisters, will take to the stage for his Blackpool debut.

Craig Coleman, Chair of Pride Blackpool, said: “We are thrilled to be working alongside VisitBlackpool to bring not just international and national performers to Pride this year, but to have some amazing local home-grown talent as part of the weekend of entertainment for everyone.

“This year, we will be making full use of the Promenade’s famous Tower Festival Headland Arena not just for the live music but there will be lots to do for younger families in the family-friendly areas with events and activities taking place across the whole of the weekend.

Right Said Fred are known the world over for their biggest hit, ‘I’m Too Sexy’. Formed by brothers Fred and Richard Fairbrass, they have achieved over 22 million sales worldwide, reaching number one in 30 countries. They won two Ivor Novello Awards for their debut chart-topping single and a follow-up single, Deeply Dippy.

Southport-born Marc Almond is one of the biggest names in UK music, selling more than 30 million records worldwide. Prior to launching his solo career, Marc was part of Soft Cell, the electro pop duo that went on to record four albums, including the single Tainted Love that broke all records in the US Billboard charts. His hugely successful solo career has seen him produce a dozen albums and a second number one single, ‘Something’s Gotten Hold of My Heart’, record with Sixties Legend Gene Pitney. He has been awarded the Ivor Novello Inspiration Award.

Right Said Fred and Marc Almond will be joined on the Friday night by singer-songwriter Lucy Spraggan, who found fame on The X-Factor and who will appear at Glastonbury 2020; and by Lolly, who burst on to the pop scene in 1999 with the release of her first single ‘Viva La Radio’.

Saturday’s headline act, Jake Shears, is the charismatic lead singer of the multi platinum-selling, Grammy-nominated, Brit award-winning glam rock band Scissor Sisters. In 2018 he joined the cast of Kinky Boots on Broadway in the lead role as Charlie Price, and released his debut book and memoir ‘Boys Keep Swinging’.  In the same year, Jake released his eponymous debut solo album to critical acclaim, followed by tours in the UK and US, and most recently in Australia with Kylie Minogue. When not on tour, he divides his time between Los Angeles, New York and New Orleans.

Jake will be supported on the Saturday night by Blackpool’s own powerhouse, Jenny Ball, who has enjoyed a decade of stage success including appearances on The X-Factor, The Voice and Britain’s Got Talent, and is a veteran of many Pride events. In 2019, she was the winner of Pride Stars and more recently winning the World Karaoke World Championships in Tokyo.

Cllr Gillian Campbell, Deputy Leader of Blackpool Council said: “We are delighted to be working with Pride Blackpool this year to bring amazing music performers to Blackpool.

“It promises to be one of the summer’s main events bringing a weekend of colour and excitement to the resort with something for everyone to enjoy.”

Further details about Pride Blackpool Weekend 2020, including family entertainment and a parade along the seafront on the Saturday, will be revealed in the coming weeks.  Check www.prideblackpool.co.uk for more information.