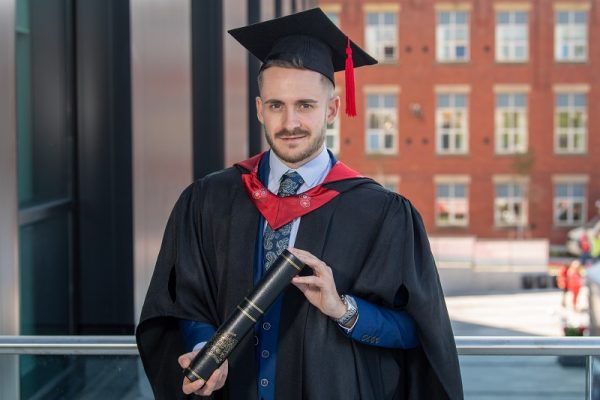 A whole world of opportunities awaits Alessandro Accica after he recently achieved a Distinction in his BA (Hons) International Hospitality Management degree at UCLan.

His graduation ceremony marks the end of a whirlwind four-year journey which has taken him all over the world. The 22-year-old will begin a graduate position in London with the Dorchester Collection chain of luxury hotels. He landed the prestigious role after excelling during a spell as Assistant Manager with the Scottish Apex Hotels group.

During his course Alessandro took advantage of some incredible work experience opportunities and succeeded in building up an impressive range of skills.

During his placement year he jetted off to the United Arab Emirates to take on a seven-month internship at the five-star St Regis Hotel complex in Abu Dhabi. Despite initially struggling to acclimatise to the sweltering heat of the Middle East, he threw himself into the role, providing an exemplary service to customers in a range of front-of-house roles, taking on supervisory responsibility and acting as an ambassador for the brand.

By this time his talents were already in great demand – when he accepted the opportunity in Abu Dhabi he had to turn down competing offers from other high-profile companies overseas, including one based in Austin, Texas.

Alessandro has certainly come a long way since he moved to Preston from Italy four years ago. He admits that he initially struggled with the rigours of his course: “At first I found it really difficult to understand British accents,” he remembers, “And so I couldn’t keep up with the pace of my lectures.”

Undeterred, he immersed himself in the English language by making friends with numerous British students and making the effort to converse in English as often as possible. He was also able to overcome a lack of self-confidence in the early days by honing his presentation skills and engaging in group work.

“Very soon I started to get to grips with the course, my confidence grew and my hard work began to pay off,” he says.

“I was really impressed by my experience at UCLan,” says Alessandro. “The course content was very practical, featuring lots of contemporary case studies. We looked in depth at emerging trends across the hospitality industry, exploring lifestyle marketing and how luxury hotel chains are targeting their services towards millennials. Other modules focused on management skills and how to succeed at job interviews, which was useful as the hospitality industry is a highly competitive field for new graduates.”

A real highlight for Alessandro was the opportunity to venture overseas to engage in cultural experiences and international work placements.

He took part in an immensely enjoyable exchange visit to China as part of UCLan’s ‘Journey to the east’ project. Relishing the chance to experience an unfamiliar culture, he attended lectures and socialised with Chinese students, picking up a few phrases in Mandarin along the way.

Alessandro added: “I had never journeyed outside of Europe before, so this was an incredible experience for me. I really valued the chance to learn about the lives and cultural traditions of people on the other side of the world and I appreciated the chance to get an insight into another language.”

He also took part in field trips to Iceland and Poland, and seized opportunities to learn other languages, signing up for extracurricular classes in French and Spanish hosted by the University’s Worldwise Learning Centre.

“Becoming multi-lingual has proven to be a huge asset. In today’s international hospitality industry, the ability to converse with customers and colleagues in multiple languages gives you a real advantage, opening up all sorts of job opportunities in other countries.”

Alessandro is excited about what the future holds: “I’ve had an amazing time at UCLan and the skills I gained on the International Hospitality course have given me the best possible preparation for a flourishing future career. I can’t wait to see what the next few years have in store.”

On 15 July, Alessandro was awarded the Marriott Prize for Academic Excellence. He collected the prize while attending his graduation ceremony at UCLan. It is given to a student who has excelled during their placement year and during their time at the University, recognising their ambition and dedication.

In addition, Alessandro was included in the prestigious Dean’s List, published by the Lancashire School of Business and Enterprise at UCLan. It recognises his remarkable achievements in gaining both a first-class degree with honours and the Marriott Prize for Academic Excellence.