Undeniably proud - in a glass of their own

The New Cuckoo Bottle – Shaped by Nature
For the past 18 months, Brindle Distillery have been working hard in the background on an exciting development for the business and their customers. Today they celebrate the launch of the brand new, bespoke Cuckoo Spirits bottle, ‘Shaped by Nature’, made in the UK and designed to be more sustainable. 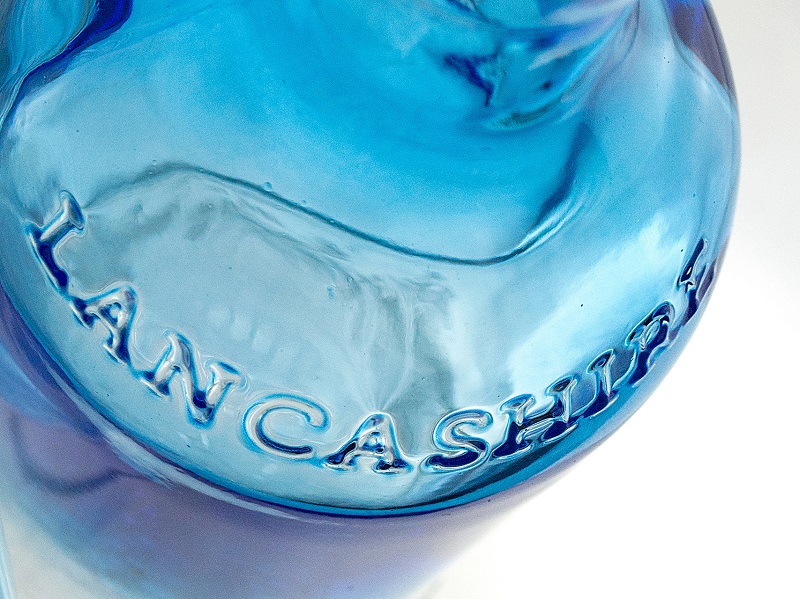 A dream bottle come true
The new bottle is an evolution of the original Cuckoo Gin bottle, a beautifully decorated adaptation of an off-the-shelf option launched in 2017, when Brindle Distillery opened their barn doors and started distilling sustainably handcrafted spirits on their Lancashire farm. In those early days, a custom bottle wasn’t a viable option, as the funds simply weren’t available at that time. Instead, they settled on a stock bottle and got creative, putting their unique stamp on it and, in the process, winning an IWSC Gold Award for Packaging.

Fast forward four successful years, and when a large order for Cuckoo Solace Gin came in from Craft Gin Club, as well as raising over £10,000 for Jo’s Cervical Cancer Trust, it afforded the proud distillers of Cuckoo Gin, the opportunity to create their own unique bottle that tells their story and aligns even more closely with their brand principles.

A new design from the ground up
The Cuckoo Gin bottle and packaging design has been instrumental to the success of the brand both locally and nationally, and has never failed to stand out on the increasingly crowded craft gin shelf. This made the redesign a case of evolution, rather than revolution.

Cuckoo’s branding and design agency, Design by Gray worked alongside UK-based bottle manufacturers, Allied Glass, to consider how the distinctive and much-loved design features of the original bottle could be enhanced on the new one, as well as giving consideration to the overall shape and the eco-friendly nature of the bottle.

Graham Walker, Creative Director at Design by Gray, explains, “The inspiration behind the Cuckoo bottle has always been linked to the sustainable distilling process and the beautiful natural surroundings at Holmes Farm, where Cuckoo Gin is made, and where ingredients for the spirits are grown.”

The illustration of wild botanicals, hand-drawn for the original bottle by local artist, Dorothy Charnley, has been reimagined and embossed into the body of the bottle. Graham continues, “As well as being incredibly tactile the new bottle looks like it could quite literally have been grown in a farmer’s field.” 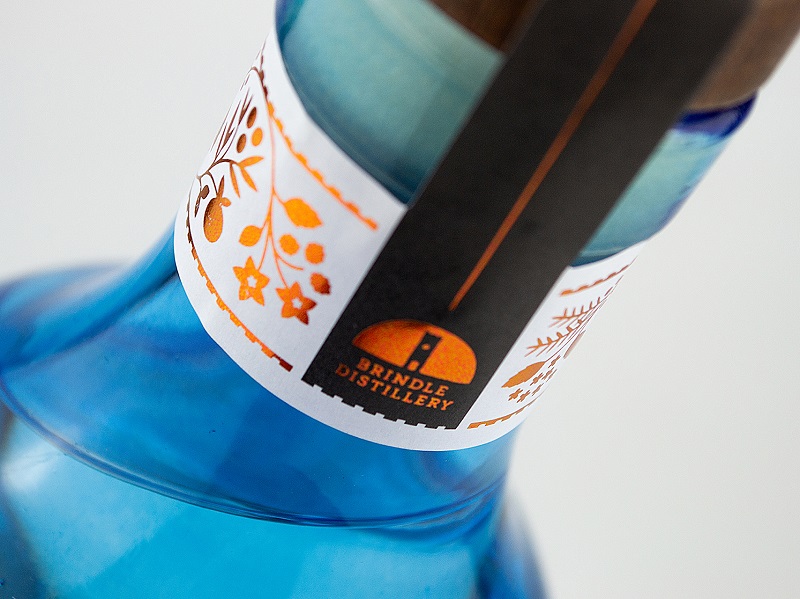 Lancashire’s finest
Design by Gray’s ‘Shaped by Nature’ approach to the design inspired other key features such as the new curved body which, when the bottle is turned on its side, is reminiscent of the undulating landscape of the Pennines that run through the heart of Lancashire. In addition, depth has been added to the various colour gradients which represent the ever-changing,
and sometimes unpredictable, skies above Lancashire.

The new rolling shape and bold coloured gradients, are not the only representations of Cuckoo’s Lancashire roots. The new bottle design proudly displays the name of their home county, elegantly embossed in capital letters around the shoulder making it undeniably ‘Lancashire’. To complete the redesign, all of the bottle labels have been carefully reconsidered. A new, combined neck and security label has been introduced which features intricate illustrative botanical detailing, as part of a wider development of the brand’s visual identity.

The main bottle labels represent the sun, which completes the rural landscape picture presented by the bottle, and is inspired by the story of the Brindle Cuckoo – from where the brand name is derived. For a superior, premium look, all of the labels are printed on high quality papers with luxury embellishments such as embossing and metallic foils. 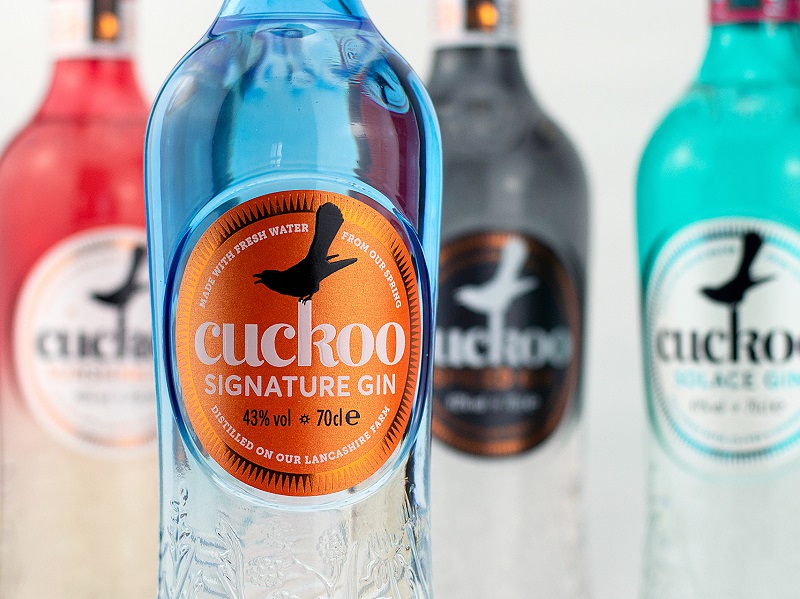 Sustainably made in the UK
Throughout the design process, the Brindle Cuckoos have clearly had the environment at the forefront of their minds.
Mark Long, Director and Master Distiller at Brindle Distillery, explains, “We now have a bottle that not only looks fantastic but is better quality and even more environmentally friendly than we had originally envisaged.”

“Sustainability is one of our key brand principles at Brindle Distillery and runs through everything we do. Creating our new bottle has allowed us to take control of more elements of the production process which means our bottle lives up to the high standards of quality and sustainability that we set ourselves as a business.”

The new bottle is made in the UK with recycled glass and is 50% lighter than its predecessor, significantly reducing the overall carbon footprint of the bottle from production to delivery. “We made the decision to have our bottle made in UK, in particular the North due to the proximity of the factory to our location in Lancashire. Supporting British manufacturing and
the assurance that we were going to get a quality product were also key factors in our decision-making process for the new bottle,” explains Mark.

Delighted with the outcome, Brindle Distillery hope their new Cuckoo bottle will continue the successful growth of the Cuckoo brand, not only locally and nationally but also globally, where they have already begun exporting to Europe, Asia and Australia. As demonstrated by the carefully considered design of their impressive new bottle, when it
comes to the future of Cuckoo, the sky’s the limit.
_
The entire Cuckoo Gin range is now available in their brand new bottle and can be purchased from their online distillery shop at brindledistillery.co.uk or direct from Brindle Distillery