A total of 1,647 responses were received and key findings are presented within this report 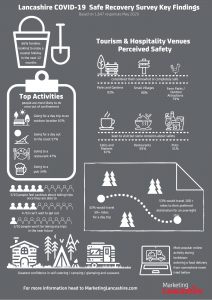 Marketing Lancashire set out to explore the behaviours, attitudes and perceptions of consumers in response to the COVID-19 pandemic, lockdown restrictions and subsequent changes to their leisure and travel activities alongside intentions and confidence towards future trips and activities. Consumer sentiments towards the application of safety precautions and measures against the spread of COVID-19 in tourism and hospitality venues were also considered. This was undertaken through means of an online consumer survey, conducted between 19th and 29th May 2020.

A total of 1,647 responses were received and key findings are presented within this report. It may be noted that the timing of this survey fell shortly after the Government published its COVID-19 Recovery Strategy and staged roadmap for easing elements of lockdown (11 May 2020). During this survey period, people could begin to drive to other destinations and were allowed outdoors for unlimited exercise. Other restrictions on unnecessary trips and social distancing remained in place.

There are a few points of note with regards to consumer demographics. Just over half of respondents (59%) stated that their place of residence was Lancashire with a further 21.5% originating from the wider Northwest region (of which Greater Manchester had the highest representation). Further responses represented a plethora of UK regions, but overseas respondents were not significant accounting for less than 1% of responses.

In terms of market segments, the majority of respondents defined themselves as forming a couple when travelling (58%), with families (including multi-generational families) forming over a quarter of responses (27%). This possibly reflects the average age range of respondents with over half (58%) aged over 55 years. Least represented were younger age groups with less than 1% aged under 25 years and just 6% aged between 25-34 years.

There was a good level of familiarity with those originating from outside of Lancashire whereby over three-quarters had visited the county many times before / within each year, either for a day trip or overnight stay. Just 1.74% stated that they had never visited before.

With consumers unable to travel out to enjoy their usual range of leisure activities, lockdown had influenced the uptake of a range of new online experiences with the most popular being ordering a food delivery from somewhere never tried before; live streaming or watching a previously recorded performance from a theatre, music or dance company; accessing educational resources and content from a business, destination or cultural venue and taking a virtual tour.

As lockdown begins to ease, consumer confidence in going back out and about was split between 41% who cannot wait to go out again and a slightly more reserved number (54%) who felt more cautious about doing so. 6% stated that they do not plan to go out anytime soon (it is not known whether this may reflect those respondents who may be shielding and are classed as more vulnerable). Somewhat greater levels of caution were observed amongst families and residents of Lancashire than other market segments.

The top activities people are most likely to do once out of confinement are:

Focusing more specifically on the next 12 months, respondents were asked how they believed their trip taking behaviour may change in relation to day trips and overnight stays, both domestically and overseas. For Lancashire, as a visitor destination, there is a potential net loss in the number of day trips of c. 5.6%. and potential a net loss of overnight stays of c. 11.2%. Intentions with regards to holidays overseas was more pronounced with almost half of respondents stating that they will take less trips abroad than usual. This could offer the potential to influence those intending to take less overseas trips into undertaking some domestic trips as an alternative, helping to negate the forecasted downturn in the domestic market provided that consumer confidence can be raised when it is safe to do so.

In terms of destination types that consumers would potentially consider visiting, rural coastline was most popular (65%), followed by countryside and villages (62%), mountains and hills (44%) and seaside towns (41%) making Lancashire well placed to welcome visitors when the time is right and when it is safe to do so. These results vary somewhat from consumer rankings nationally whereby one of the most notable differences was rural coastline considered by just under a quarter of consumers nationally (average of 22% ); and mountains and hills which was considered by less than 20%; cities and large towns also featured more predominantly nationally, considered by almost a third of consumers.  (Source: VisitBritain Consumer Sentiment Tracker 1 June 2020).

When looking at specific locations and venues within destinations, there is greater confidence in outdoor locations and venues than indoor ones, reflecting national sentiments. Parks and gardens, visiting small villages or towns and outdoor attractions (including farm parks) were perceived as the safest types of places and venue to visit. It may be noted that consumers were keen to visit retail venues, including farm shops / deli / food halls as well as non-retail establishments and markets once lockdown restrictions end. Theme parks and indoor cultural venues, particularly theatres and cinemas were least appealing with verbatim comments referring to challenges around social distancing and hygiene of common touch points within venues. Public transport – taking a train or bus ride and indoor experiences such as spas were also limited in their appeal to consumers at this time.

Attitudes towards when people might start eating out were mixed despite being one of the top activities that consumers were keen to do. Just one quarter of consumers said they hoped to visit either a pub, café or restaurant as soon as confinement is over. The majority, just under a third, are planning to wait for a few weeks after confinement has ended with around a further quarter intending on waiting a few months before they visit.

In terms of guest accommodation, confidence appeared greatest for self-catering establishments and camping /glamping / caravan options, possibly reflecting consumer concerns about hygiene standards of common touch points including bathrooms, bedding, etc as well as social distancing which can be more easily applied within these types of establishments. Some variation to national perceptions is noted here whereby there appeared to be greater propensity to stay in serviced accommodation with almost half (48%) respondents stating they would consider a stay between June-September and 62% who would plan a visit from October onwards. This compares to just 20% of respondents in this survey who would stay once lockdown ends and 31% who would wait several months before considering a stay in a hotel.

There is a clear need to regain consumer confidence towards tourism and hospitality venues through visible safety measures as well as sensitive messaging. The introduction of a COVID-safe national standard for businesses was supported by over half of respondents whilst over one third would be happy if this was a local standard. However, some commented that the absence of a standard would not deter visits and concerns were raised around the need to develop a standard through trustworthy sources with a clear evidence base. Issues around policing and monitoring were also raised.