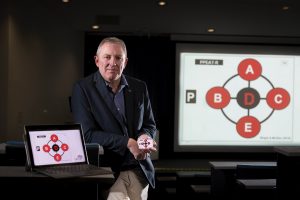 Researchers from the University of Central Lancashire (UCLan) have today been recognised for their exceptional contribution to keeping the nation healthy.

Dr Ivan McGlen and Professor Karen Wright from the School of Nursing are two of the Nation’s Lifesavers – the top 100 individuals or groups based in universities whose work is saving lives and making a life-changing difference to our health and wellbeing.

They have been named for the first time today as part of Universities UK’s MadeAtUni campaign, which brings to life the impact of universities on everyday lives.

The duo initiated the project following a report by Her Majesty’s Inspectorate of Constabulary, Fire and Rescue Services, which concluded that more than half of all mental health patients who need help in a place of safety are taken there in a police car rather than an ambulance. Police – instead of NHS staff – take ill patients to hospital about 12,000 times a year, or in 52 percent of cases.

People with mental health issues often require immediate assessment and management, but effective communication between the police officer and the vulnerable person has historically been a challenge. It is hoped that the PPEAT-R tool will address this.

“It is a fantastic honour to feature as one of the Nation’s Lifesavers” said Dr McGlen. “The PPEAT-R was developed through extensive research with Durham Constabulary and the Metropolitan Police Service and was the first study to explore a police officer’s situation awareness when encountering a potentially mentally disordered person.

“As a senior nurse in accident and emergency, I saw at first hand the issues encountered by police trying to assess a person’s mental health and wellbeing.

“The police would often bring people with mental and wellbeing issues into the hospital, but it wasn’t uncommon to see them being released back out into the community in a very short space of time.  This was because the arresting officers didn’t have the skills to articulate an accurate mental health diagnosis to hospital staff.

“The police needed an easy to understand aid memoire which could help them, and other emergency services, to recognise the key signs of mental disorder.”

The research, which took place over a period of eight years, resulted in the following PPEAT-R checklist:

Pre-encounter: The pre-existing personal and professional characteristics, experience, and expertise, which underpin a police officer’s operational response to a potentially mentally disordered person.

Appearance and atmosphere:  what you see first including physical problems such as bleeding.

Behaviour:  what individuals in distress are doing, and if this is in keeping with the situation.

Communication: what individuals in distress say and how they say it.

Danger: whether individuals in distress are in danger and whether their actions put other people in danger.

Environment: where a potentially mentally disordered person is situated, and whether anyone else is there.

Professor Wright said: “During our trial, there was a significant shift in police officers’ assumption of criminality, with the tool enabling officers to accurately respond to and recognise a person’s mental health and wellbeing.

“By using this cognitive aid, police officers or other emergency services can organise and structure the information they acquire during their assessments.  They can then pass this information on to paramedics, medical staff, specialist mental health professional or other relevant personnel.”

The PPEAT-R is available as a double-sided, credit card sized document, as well as an android smartphone app.  Using the app, the user may access further, detailed information to support their assessment.

Professor Wright added: “There are no known competitors to this product. Indeed, its forerunner the PPEAT and its training package was adopted by the College of Policing as its ‘vulnerability assessment framework’. We think this latest version has great potential. Already we have been approached by a national security services company, keen to use PPEAT-R and we expect to see it used by the full range of emergency services in the coming years.”

The Nation’s Lifesavers are fighting diseases, helping new parents and children enjoy the best start in life, supporting older people and improving our mental health and wellbeing. The selection reveals the amazing use of technology, such as drones to fight malaria, a smart glove for communicating sign language and robots helping older people.

Universities from across the country were invited to nominate an individual or group who has made a significant contribution to the nation’s health and wellbeing. Over 100 universities from Plymouth to Dundee submitted a nomination.

Professor Dame Janet Beer, President Universities UK, said: “When people think of lifesavers they tend to focus on the dedication and skill of our doctors, nurses, carers, and paramedics – many of whom are trained at universities. Every day, up and down the country, universities are also working on innovations to transform and save lives.

“Research taking place in universities is finding solutions to so many of the health and wellbeing issues we care about and the causes that matter.

“By proudly working in partnership with charities, the NHS and healthcare organisations, universities are responsible for some of our biggest health breakthroughs and in revolutionising the delivery of care.”

Research shows the public are proud of UK universities[1] but have little understanding of the benefits they bring, with most not being aware that UK academics are behind many of the discoveries that save lives and keep up healthy. The MadeAtUni campaign gives the public an insight into some of this work and celebrates those who made it happen. More information on the campaign can be found on the dedicated website: www.madeatuni.org.uk