An international team of astronomers, including those from the University of Central Lancashire (UCLan), have today unveiled the first image of the supermassive black hole at the centre of our own Milky Way galaxy. 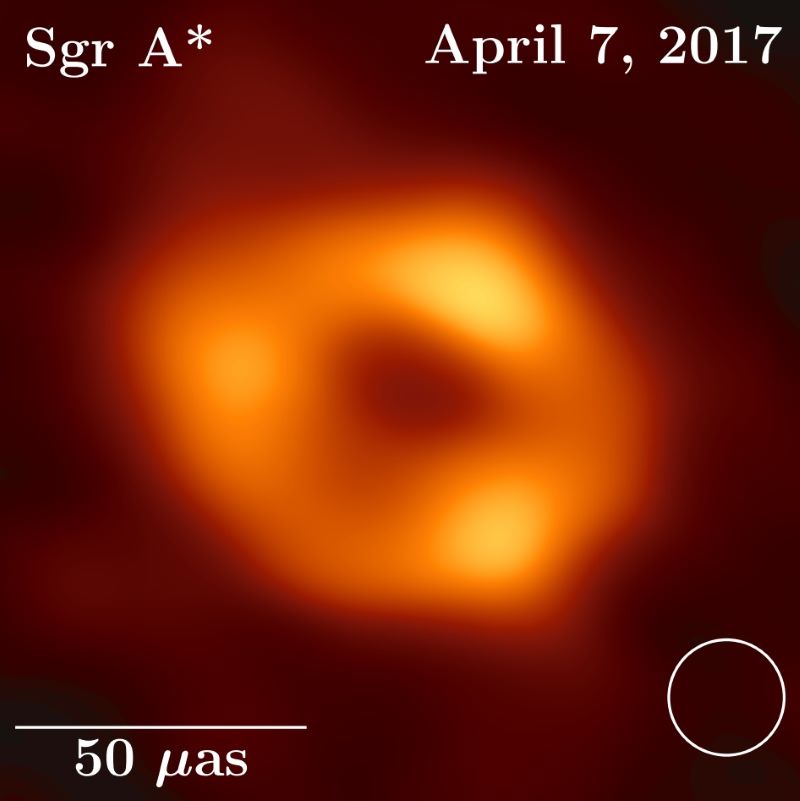 The announcement provides overwhelming evidence that the object is indeed a black hole and yields valuable clues about the workings of such giants, which are thought to reside at the centre of most galaxies.

The UCLan researchers, led by Professor Derek Ward Thompson, are part the Event Horizon Telescope (EHT) Collaboration, which has used observations from a worldwide network of eight radio telescopes to take the stunning image.

The image is a long-anticipated look at the massive object that sits at the very centre of our galaxy. Scientists had previously seen stars orbiting around something invisible, compact, and very massive at the centre of the Milky Way. This strongly suggested that this object, known as Sagittarius A*, is a black hole and today’s image provides the first direct visual evidence of it.

Although we cannot see the black hole itself, because it is completely dark, glowing gas around it reveals a tell-tale signature: a dark central region (called a “shadow”) surrounded by a bright ring-like structure. The new view captures light bent by the powerful gravity of the black hole, which is four million times more massive than our Sun.

The EHT team’s results are being published today in a special issue of The Astrophysical Journal Letters.

Commenting on today’s announcement Professor Ward-Thompson, the Head of UCLan’s School of Natural Sciences, said: “The publication of the EHT picture of the Sagittarius A* black hole is a tremendously exciting achievement by the collaboration.

“The University of Central Lancashire has been associated with the James Clerk Maxwell Telescope (JCMT) in Hawaii for over 30 years, and the JCMT is a core part of the world-wide network of telescopes that has taken this picture.”

“We were stunned by how well the size of the ring agreed with predictions from Einstein’s Theory of General Relativity,” added EHT Project Scientist Geoffrey Bower from the Institute of Astronomy and Astrophysics, Academia Sinica, Taipei. “These unprecedented observations have greatly improved our understanding of what happens at the very centre of our galaxy and offer new insights on how these giant black holes interact with their surroundings.”

Because the black hole is about 27,000 light-years away from Earth, it appears to us to have about the same size in the sky as a donut on the Moon. To image it, the team created the powerful EHT, which linked together eight existing radio observatories across the planet to form a single “Earth-sized” virtual telescope [1]. The EHT observed Sgr A* on multiple nights, collecting data for many hours in a row, similar to using a long exposure time on a camera.

The breakthrough follows the EHT collaboration’s 2019 release of the first image of a black hole, called M87*, at the centre of the more distant Messier 87 galaxy.

The two black holes look remarkably similar, even though our galaxy’s black hole is more than a thousand times smaller and less massive than M87* [2].

The effort was made possible through the ingenuity of more than 300 researchers from 80 institutes around the world that together make up the EHT Collaboration.

In addition to developing complex tools to overcome the challenges of imaging Sgr A*, the team worked rigorously for five years, using supercomputers to combine and analyse their data, all while compiling an unprecedented library of simulated black holes to compare with the observations.

Scientists are particularly excited to finally have images of two black holes of very different sizes, which offers the opportunity to understand how they compare and contrast. They have also begun to use the new data to test theories and models of how gas behaves around supermassive black holes. This process is not yet fully understood but is thought to play a key role in shaping the formation and evolution of galaxies.

Progress on the EHT continues: a major observation campaign in March 2022 included more telescopes than ever before. The ongoing expansion of the EHT network and significant technological upgrades will allow scientists to share even more impressive images as well as movies of black holes in the near future.

UCLan’s Professor Ward-Thompson has been named as the chair of the talented group of scientists which forms the EHT publication committee as well as the communicating author for the six prestigious research papers which are to be published as a result of the discovery.

Watch out for wildlife