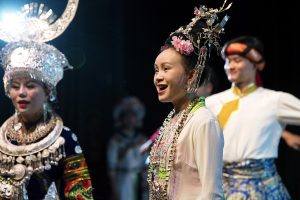 A vibrant and energetic dance display heralded the start of the University of Central Lancashire’s (UCLan) Chinese New Year celebrations.

The Troupe marked the Year of the Rat by performing a range of musical numbers and dances to a packed-out crowd in UCLan’s Media Factory.

The song and dance troupe, which was established in 1956, is the largest troupe in the Guizhou province and one of the most influential in south east China. Having performed all over the world, the Guizhou Song and Dance Troupe combine unique folk customs of Guizhou with different artistic styles.

Among the sell-out crowd was Deputy Mayor of Preston Councillor Javed Iqbal JP. The troupe was brought to the City by the UCLan Confucius Institute, which aims to promote Chinese language and culture in the community.

Feixia Yu, Director of the UCLan Confucius Institute, said: “Every year Preston really embraces the culturally-enriching Chinese New Year celebratory events and this year is no exception. The Guizhou Song and Dance Troupe is one of the most influential in south east China so we’re delighted they’ve been able to bring their amazing show to entertain the people of Preston.

“If you missed the performance, you can still join in the Chinese cultural fun at Harris Museum on 25 January and at the Lancashire Archives on 29 January.”

Go behind the scenes at the Winter Gardens